Happy New Collecting Year when we get there.

Janus is the god of beginnings, gates, transitions, time, duality, doorways, passages, frames, and endings. He is usually depicted as having two faces, since he looks to the future and to the past. The month of January is named for Janus

1 January was New Year day. On that day it was customary to exchange cheerful words of good wishes. For the same reason everybody devoted a short time to his usual business, exchanged dates, figs and honey as a token of well wishing and made gifts of coins called strenae.

Numa built the Ianus geminus , a passage ritually opened at times of war, and shut again when Roman arms rested.  In wartime the gates of the Janus were opened, and in its interior sacrifices and vaticinia were held, to forecast the outcome of military deeds. The doors were closed only during peacetime, an extremely rare event 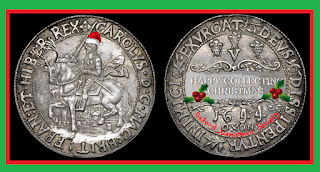 A very Happy Coin Collecting Christmas to everyone.

I keep promising myself I will stop getting more places to store coins, however it does not work. My collection grows sideways and possibly not upwards. I am reusing an old album I was given in the 1980s because it is a cheap and easy way to house cheap and easy coins. These are the modern world coins, taken from circulation on trips, which have no value at all except they are interesting and perhaps one day will be old and probably no value then.

They show how coins vary to show changes in fashion, politics and economics. the real value of a coin is that is shows a moment in time, and was used by ordinary people in their day to day lives.

The theme of today's meeting was messengers and angels.

the first photograph is of an Oxford token issued for John Tey at the Angel pub in High Street and a rather nice Henry VII angel. 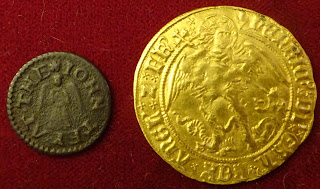 The next is another gold coins. These were issued by Charles I and his son Charles II of Anjou who was king of Naples and Sicily. The ones issued by his son are much rarer. They both issued a saluto d’argento which are silver coins with similar designs. The word salute means greeting in Italian and refers to the Angel’s message to Mary which he begins by saying “Hail”.  The legend is AVE GRACIA PLENA DOMINUS TECUM which means Hail (you who are) full of grace, The Lord (is) with you.

The lily between them is both a symbol of purity and of the French royal house. The arms on the other side are those of the house of Anjou with the heraldic fleur de lys and the arms of the kingdom of Jerusalem. The engraver was Giovanni Fortino, 1266–1278

Lastly we have some medallions commemorating the French invasion of Wales in 1797. 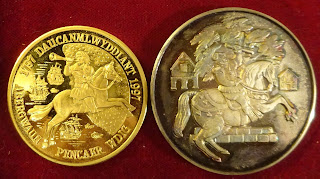 Thanks to Charles Riley for first and last photos.