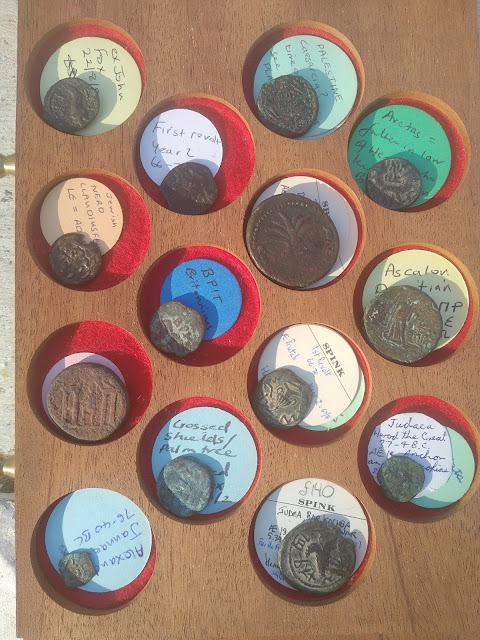 The theme is this month's meeting was Ancient Coins. Just about as wide a subject as possible. I choose some ancient coins from Palestine and surrounding areas.

Aelia Capitolina was a Roman colony, built under the emperor Hadrian on the site of Jerusalem, which was in ruins following the siege of 70 AD.

The Bar Kokhba revolt was against the Roman Empire in 132-135 AD. 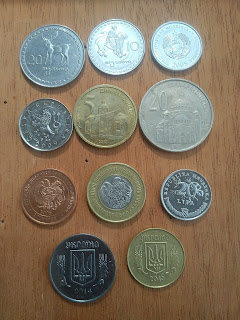 I put out a local request for people to send in unwanted coins in aid of a charity. here are some interesting coins mainly from eastern Europe. the coin from Transnistria interested me as I could not identify it at first. The hammer and sickle looks Soviet Russian but the 2005 date was post communist era.
It is an unrecognised state that split off from Moldova after the dissolution of the USSR and mostly consists of a narrow strip of land between the river Dniester and the territory of Ukraine.
After the dissolution of the USSR, tensions between Moldova and the breakaway Transnistrian territory escalated into a military conflict that started in March 1992 and was concluded by a ceasefire in July of the same year. As part of that agreement, a three-party (Russia, Moldova, Transnistria) Joint Control Commission supervises the security arrangements in the demilitarised zone, comprising twenty localities on both sides of the river. Although the ceasefire has held, the territory's political status remains unresolved: registration. It is the only country still using the hammer and sickle on its flag.


Coins from Armenia and Ukraine you do not see every day! Amazing what you can find.