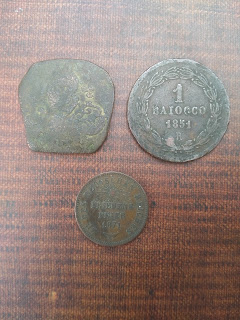 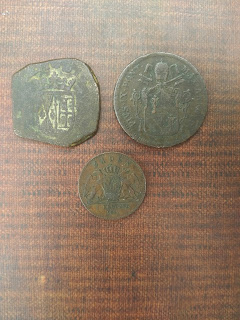 The company you keep.


These are three copper coins I bought last Saturday for the princely sum of £9.00. "I was robbed" do you say?"

The first time you look the bottom coin seems to be a fairly common copper 1 Kreuzer and on a second glance so it is - but it has the inscription FRIEDENS FEIER which refers to the Prussian victory over the French in the Franco-Prussian War. so that makes interesting.

the top right is a standard coin from the Vatican. I always find this series interesting. the left one is a bit of a mystery. It was sold with a quite nice large copper coin from Sicily and it was a fair bet that it is Italian as well. It is not in good condition but you can just about see the arms of the kingdom of Jerusalem  on left and kingdom of Sicily. the obverse has the armoured bust of a king.

I have another copper of Sicily which was struck by one of the Spanish Philips. both have very irregular flans. the other one is virtually hexagonal. I dont know why; perhaps they were struck in a hurry or were not bothered if the coins were circular or not. 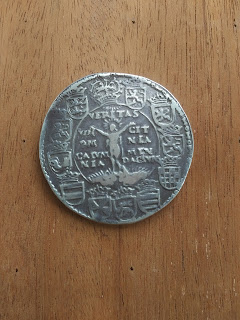 I always thought this taler was a religious one but when I researched it I found it is a “Truth taler” and was issued for political reasons. Happy Easter everyone.

In the late 16th Century, Heinrich Julius wanted to implement legal reform. At the time, the legal system was based on the Saxon system of using local elders to adjudicate. This is similar to the Anglo-Saxon witanagemot from almost 1000 years earlier and that which is still in use unofficially or officially in the Middle East, Central Asia and South Asia and probably elsewhere.
Heinrich Julius wanted to replace the Saxon system with the Roman system where the laws and procedures are codified. (This is actually the Hammurabi system.) But this meant that the local elders will lose much of their influence, and that caused political discord between the two sides.
source

https://forums.collectors.com/discussion/996168/newp-brunswick-wolfenbuttel-truth-taler
Posted by David at 00:22 No comments: