The theme for this month was Austria and the Austrian Empire including Austrians in Netherlands and Italy. Not a particularly seasonal theme but then you cannot have everything.

The Kingdom of Lombardy–Venetia was part of the Austrian Empire. It was created in 1815 by resolution of the Congress of Vienna in recognition of the Austrian House of Habsburg-Lorraine's rights to Lombardy and the former Republic of Venice after the Napoleonic Kingdom of Italy, proclaimed in 1805, had collapsed. It was finally dissolved in 1866 when its remaining territory was incorporated into the recently proclaimed Kingdom of Italy
The Lombardy-Venetia florins were the coins of Lombardy-Venetia (reduced to the sole Venetia three years before) between 1862 and 1866. It replaced the pound at a rate of 1 florin = 3 pounds. The florin was equivalent to the Austro-Hungarian gulden (also called the florin). Although it was subdivided into 100 soldi rather than 100 kreuzer, Austrian coins circulated in Venetia. The only coins issued specifically for Venetia were copper ½ and 1 soldo pieces.
The Austrian Netherlands was the larger part of the Southern Netherlands between 1714 and 1797. The period began with the acquisition of the former Spanish Netherlands under the Treaty of Rastatt in 1714 and lasted until its annexation during the aftermath of the Battle of Sprimont in 1794 and the Peace of Basel in 1795. Austria, however, did not relinquish its claim over the province until 1797.
The liard was a subdivision of the kronenthaler, the currency of the Austrian Netherlands (modern Belgium). There were 216 liards to a kronenthaler. Following the French occupation of the Austrian Netherlands in 1794, the kronenthaler was replaced by the French franc. 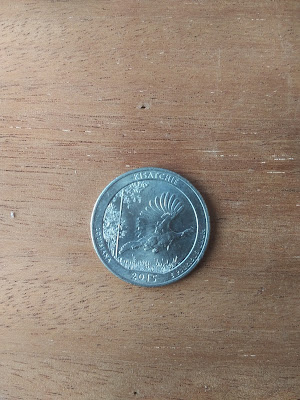 Thanks to Wikipedia for information

Finally something Christmassy A real turkey

This is the only coin I know of with a turkey bird on it. It is an excellent design as it is not easy to make a flying turkey look good. It is the 2015 Kisatchie National Forest quarter featuring the National Forest of Louisiana and is the second national site to be honoured from the United State Mint’s program of America the Beautiful quarters.
The coin was designed by Susan Gamble and sculpted by Joseph Menna, it depicts a wild turkey in flight over blue stem grass, and a long leaf pine tree in the background. Sadly, the designer Susan Gamble died at a young age in 2015. Gamble also won the international Coin of the Year Award for Historical Significance for the United States of America for her 2007 Jamestown silver dollar design.