The trolley was heavily laid down with bags full of brass thruppenny bits (three-pence pieces), silver-coloured sixpences, bronze pennies and two shillings — it was not easy to pull it along in a busy high street even with a colleague pushing from the rear. At the same time as pushing and pulling, both of us kept checking that no bags or coins fell on the way. That day, we were taking the money to a competitor’s bank which was running low on its supply of hard cash.

Back in the 1960s, a one-penny coin measured 31 millimetres in diameter and weighed 10 grams. Before we decimalised in 1971, twelve pennies (12 pence) made up a shilling, and twenty shillings made a pound. Hence 240 pence was the equivalent in monetary value of a one-pound banknote. There were no pound coins then, pound coins were not introduced in this country until 1983. Each of our 1960's cloth bags held the worth of five pounds, that's the equivalent of 1,200 pennies, or, in weight: 12 kilograms — the same as a dozen 2lb bags of sugar!

A trip to open up a small sub-office in the morning involved having a large suitcase of cash double-strapped to one wrist, while in our other hand we held a bank truncheon (a rounded heavy stick) to stave off attackers. We’d frequently travel in a local taxi where our usual driver, a portly gentleman I recall, would drive us very slowly while he smoked his pipe. We’d telephone the main branch to report we had arrived safely at our destination – having survived both attackers and the smoke!

Everyday use for coins back then was to feed a pay-as-you-go gas meter built into many homes. Most of these locked metal boxes were fed with shillings, and so it was essential to keep a well-stocked supply of these coins at home to ensure the heating stayed on. These meters would be emptied regularly and it was customary for people to buy-back from their meter-man (only men held that job in our area) the same set of coins they would empty, for re-use. Some would have been older, special specimens set aside to keep, but when the lights went out any coin would do in the rush to restore power. Sometimes on collection day the coins were exchanged for banknotes by mistake.

Ultimately coin bags of meter shillings would be paid in over the sub-office counter. As a cashier in the 1960’s I was then able to discover shillings dating back to the new coinage (1816-1820) of George third and those of Queen Victoria struck with ‘young head’ ‘jubilee head’ or ‘veiled head’.

There were Florins to be found of Edward VII, one pictured below, depicting Britannia standing - turned half-right towards us - holding an upright trident with an oval-shaped shield displaying the Union Jack, with the choppy waves of the sea behind her. She wears a Roman crested helmet, and her cloak stands out as if windswept. 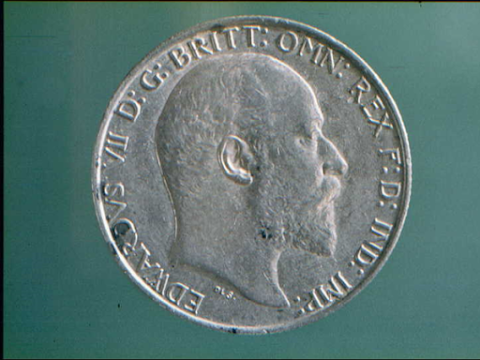 A Florin of Edward VII

They say the model for Britannia was Lady Susan Hicks-Beach, the second daughter of the then Chancellor of the Exchequer, Sir Michael Hicks-Beach. The legend on this coin, dated on the ship’s prow 1903, is ‘ONE FLORIN TWO SHILLINGS’. To my mind, this coin by G.W. De Saulles is a beautiful piece of art which epitomizes the elegance of the Edwardian age. 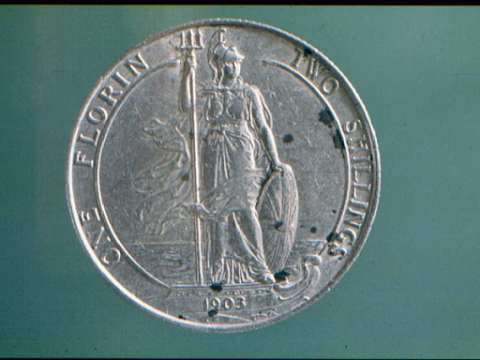 The collecting of old money really began, when in 1966, a young bank cashier became attracted to the coins in the till.

The theme for this month is private mints. The first ones we might think of are the various Birmingham mints which issued pennies in the early years of the Twentieth Century. The KN and H pennies were keenly sought by coin collectors checking their change in the 1970s.

The Mint, Birmingham, check made of copper,  arms of Birmingham, the mint birmingham around, six-pointed star punctuation, revs. ralph heaton & sons coiners around to the english and foreign governments

The Birmingham Mint, originally known as Heaton's Mint or Ralph Heaton & Sons, started producing tokens and coins in 1850 as a private enterprise, It was created by Ralph Heaton II, using second-hand coin presses bought from the estate of Matthew Boulton.

On 1 April 1850 the auction was announced of equipment from the defunct Soho Mint, created by Matthew Boulton around 1788. At the auction on 29 April Ralph Heaton II bought the four steam-powered screw presses and six planchet presses for making blanks from strip metal. These were installed at the Bath Street works, and in that year trade tokens were struck for use in Australia. In 1851 coins were struck for Chile using the letter H as a mintmark. The same year copper planchets were made for the Royal Mint to make into pennies, halfpennies, farthings, half-farthings and quarter-farthings. In 1852 the Mint won a contract to produce a new series of coins for France. In this the Mint pioneered the minting of bronze. Ralph Heaton III (son of Ralph II) took key workers to Marseilles to equip and operate the French mint there, staying to fulfil the contract, and producing 750 tons of Napoléon III bronze coins from 1853 to 1857.

In 1853 the Royal Mint was overwhelmed with producing silver and gold coins. The Birmingham Mint won its first contract to strike finished coins for Britain – 500 tons of copper, struck between August 1853 and August 1855, with another contract to follow in 1856. These coins had no mint mark to identify them as from Birmingham. During the peak of operation the four original Boulton screw presses were striking about 110,000 coins per day.

As overseas orders increased, particularly for India, the Mint added a new lever press and further equipment, filling the Bath Street premises. In 1860 the firm bought a 1-acre (0.40 ha) plot on Icknield Street (the current site, since enlarged) and constructed a three-storey red brick factory. Completed in 1862 it employed 300 staff. It was at this time the largest private mint in the world. In 1861 a contract for bronze coins for the newly unified Italy was signed, the Mint sending blanks and equipment to Milan to be struck into finished coins by their staff in Milan.

Orders for colonial coins, blanks and bar metal were a steady source of business until, in 1912, an order for 16.8 million bronze coins for Britain, and in 1918 and 1919, and further orders for 7.1 million pence saw the mint striking coins for the home market. British penny coins minted by Heaton and dated 1912 can be identified by a very small upper case letter 'H' alongside the date: many of these coins were removed from circulation by collectors. In 1912, the Mint saw its first competition as the Kings Norton Metal Company was also contracted to supply bronze blanks to the Royal Mint, and in 1914 struck coins for the colonies. In both 1918 and 1919 the Kings Norton Metal Company struck a batch of bronze pennies which can also be identified by the upper case letters 'KN' appearing to the left of the date.

In 1949 the Mint produced an edition of the Maria Theresa thaler, a silver "trade dollar" widely used in the Middle East and previously minted by the Vienna Mint, or later, the Rome Mint. Further mintings were in 1953, 1954 and 1955.

In later years, the plant became increasingly busy with the introduction of the Euro within the European Union; the mint produced several million €1 and €2 coins. However, a slump in trade and contractual agreements between them and the Royal Mint resulted in the sale of the mint in late 2003.