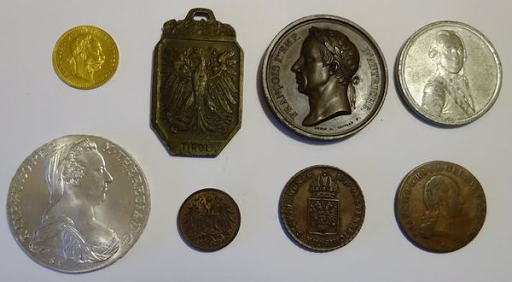 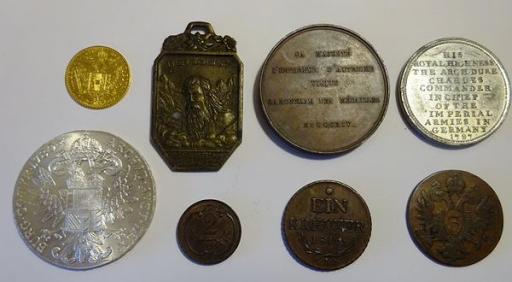 The theme this month was the coins of Austria ranging from the euro and going back to kreuzers and hellers. An interesting subject which also includes the Austria Netherlands and Italy.

the medallion is by a Nuremberg goldsmith and medallist Jacob Wolrab.

The Battle of Vienna (German: Schlacht am Kahlen Berge or Kahlenberg (Battle of the Bald Mountain);  took place at Kahlenberg Mountain near Vienna on 12 September 1683 after the imperial city had been besieged by the Ottoman Empire for two months. The battle was fought by the Holy Roman Empire led by the Habsburg Monarchy and the Polish–Lithuanian Commonwealth, both under the command of King John III Sobieski, against the Ottomans and their vassal and tributary states.

The battle was won by the combined forces of the Holy Roman Empire and the Polish–Lithuanian Commonwealth, the latter represented only by the forces of the Crown of the Kingdom of Poland (the march of the Lithuanian army was delayed, and they reached Vienna after it had been relieved).  Historians state the battle marked the turning point in the Ottoman–Habsburg wars, a 300-year struggle between the Holy Roman and Ottoman Empires. During the 16 years following the battle, the Austrian Habsburgs gradually recovered and dominated southern Hungary and Transylvania, which had been largely cleared of Ottoman forces. The battle is noted for including the largest known cavalry charge in history.

Several culinary legends are related to the Battle of Vienna.

One legend is that the croissant was invented in Vienna, either in 1683 or during the earlier siege in 1529, to celebrate the defeat of the Ottoman attack on the city, with the shape referring to the crescents on the Ottoman flags. This version of the origin of the croissant is supported by the fact that croissants in France are a variant of Viennoiserie, and by the French popular belief that Vienna-born Marie Antoinette introduced the pastry to France in 1770.

Another legend from Vienna has the first bagel as being a gift to King John III Sobieski to commemorate the King's victory over the Ottomans. It was fashioned in the form of a stirrup to commemorate the victorious charge by the Polish cavalry.

There is an often recited story that, after the battle, the residents of Vienna discovered many bags of coffee in the abandoned Ottoman encampment. The story goes on that, using this captured stock, Franciszek Jerzy Kulczycki opened the first coffeehouse in Vienna and one of his ideas was to serve coffee with milk, a practice that was unknown in the Islamic world. However, this story was first mentioned in 1783; the first coffeehouse in Vienna had been established by the Armenian Johannes Theodat in 1685. Another more likely story is that the captured stock of bitter coffee was mixed with sugar and steamed milk to produce a drink that was named Cappuccino (or kapuziner, in German) either in honour of the Capuchin Franciscan Marco d'Aviano who had inspired the Catholic forces to unity and defence or because the Capuchin priest had a role in inventing

Used by kind permission of

Used by kind permission of https://coinsweekly.com/