The June meeting marked the end of the First World War a hundred years ago.

Fighting ceased at the Armistice in November 1918 but the First World War did not officially end until the Treaty of Versailles was signed on 28 June 1919. The government decided there would be a national day of celebration on 19th July 1919. 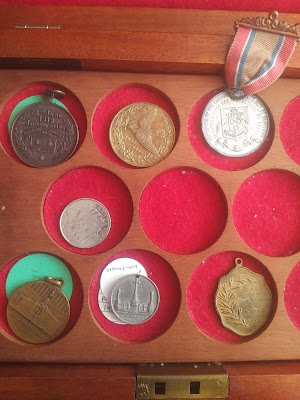 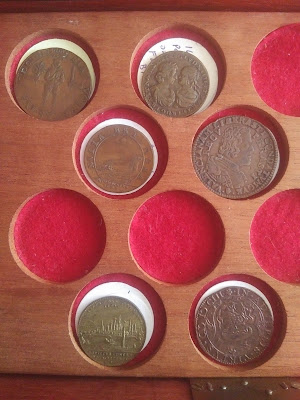 Low Countries Peace or War jetton 1608
1608  Dutchman stg & facing, Jehovah in Hebrew above, sword and olive branch as offering/Bundle of arrows, S - C, FORTITVDO BELGICA.
France peace of Isle of Faisons 1659
The Meeting on the Isle of Pheasants on 7 June 1660 was part of the process ending the Franco-Spanish War (1635–59); the Spanish princess Maria Theresa of Spain entered France for her marriage to Louis XIV of France. Pheasant Island lies on the river Bidasoa that is still the border between France and Spain, and the tiny island remains joint territory to this day.
France capture of Besancon by France from Spain
The Siege of Besancon took place between 25 April to 22 May 1674 during the Franco-Dutch War, when French forces invaded Franche-Comté, then under Spanish rule. Under the 1678 Treaties of Nijmegen, the province was annexed by France and Besancon replaced Dole as the regional capital.
Low Countries Liberation of Valenciennes (1656)
The Battle of Valenciennes (16 July 1656) was fought between the Spanish troops commanded by Don Juan José de Austria against the French troops during the Franco-Spanish War. It was the worst of only a few defeats that the French Marshal Vicente de Turenne suffered in his long career campaigning and is regarded as Spain's last great victory of the 17th century.
Spain Barcelona relieved 1706
The Siege of Barcelona took place between 3 and 27 April 1706 during the War of the Spanish Succession when a Franco-Spanish army laid siege to Barcelona in an attempt to recapture the city following its fall to an English-led Allied army the previous year. The siege was abandoned, following the appearance of a large English fleet.  Barcelona and the entire region of Catalonia remained in Allied hands until 1714.
Low Countries 1603 end of Siege of Ostend
The Siege of Ostend was a three-year siege of the city of Ostend during the Eighty Years' War and the Anglo–Spanish War. A Spanish force under Archduke Albrecht besieged the fortress being held initially by a Dutch force which was reinforced by English troops under Francis Vere who became the town's governor. This resulted in one of the longest and bloodiest sieges in world history: more than 100,000 people were killed, wounded or succumbed to disease during the siege.