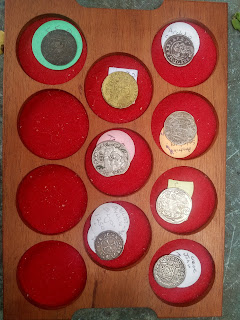 For our July meeting we looked at coins from Prince Bishops, Electors and even a 20th Century token from Birmingham. That token was issued for a bazaar in 1929. it lasted three days so that is
a lot of bric-a-brac and white elephant!

Germany Archdiocese of Bremen under Frederick II of Denmark 1642. Occupied by Danish troops during the Thirty Years War

1.    Austria Salzburg Cardinal Archbishop Matthew 1520s. Salzburg issued coins from 10th to 18th Century, they were always of a high standard. Matthäus Lang von Wellenburg (1469 – 30 March 1540) was a statesman of the Holy Roman Empire, a Cardinal and Prince-Archbishop of Salzburg from 1519 to his death.
In the course of the Reformation Lang's adherence to the older faith, together with his pride and arrogance, made him very unpopular in his Salzburg diocese. As early as in 1523 he was involved in a serious struggle with his subjects in the City of Salzburg, and in 1525, during the German Peasants' War, he had again to fight hard to hold his own. Cardinal Lang was one of the chief ministers of Charles V. He has been compared with Cardinal Wolsey.

2.    Germany Salz Land Minz 1692. 2 oval shields with the arms of Salzburg left, and of the Archbishop right, hat above, value in a circle below.

5.    Germany Trier 1694.  The Archbishop-Elector also had great significance as one of the seven electors of the Holy Roman Empire.