this is the slightly revised program

The Mad Mahdi and all that

Before during and after the Ottoman Empire

The history of these less well known places

The colonial history to the mighty dollar

Why have mint marks? Romans to now.

Why did colonies have their own coins and not just use British issues?

Arnold Mallinson was born in Lancashire in 1896. He went to school in Blackpool, served in the Navy in the First World War, and then attended the universities of Durham and Oxford. He was ordained in 1924, and after beginning his ministry in Blackpool, soon returned to Oxford, where from 1933 to 1976 he was Vicar of St Frideswide’s, Osney (with, from 1950, St Margaret’s, Binsey), and where he now lives in retirement in the latest of a series of Glenburn Houses. ‘Like all truly interesting men, the Vicar of St Frideswide’s has the rare gift of detecting and imparting what is interesting in others. And what a richness of experience he conveys!’ (Oxford Diocesan Magazine).

Revd Mallinson was our Society’s president, but sadly he passed away before I joined. Some of our current members remember him well as a great encourager of collectors, with a house more like a museum than a vicarage and many a story to tell. Recently I looked at the Spinks’ sale catalogue which covers his collection and was sold in 1984. There are just over 170 lots and the sale raised just under £330,000.00.

It is an eclectic collection ranging from Ancient times to medieval. I was interested that his collection reduced in size so he could acquire rarities. And what rarities he got! A tetradrachm of Naxos with Dionysus, extremely fine with a long pedigree. An oxford Pound coin 1644 described as “probably the finest thing in English coins.” A gold triple unite which surprisingly only went for £1700.00. A pavilion d’or found in the roof of a French cottage and bought from a Parisian jeweller. I think my favourite is a 1659 Commonwealth halfcrown, the only known specimen, a gift from Sir Cuthbert Cartwright Grundy whose family had acquired it in the Seventeenth Century.  Sold for £4,200.00.

His books are very entertaining for coin collectors everywhere and can still be found on Amazon or Ebay quite reasonably. I wish I had met him. The auction included an Elizabeth I crown with the comment, “The former owner grieved when he had to part with this. So do I.” At least someone else is enjoying it now. 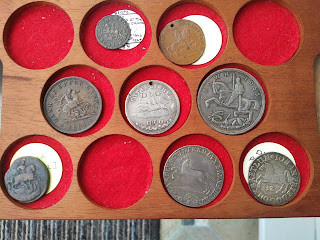 November’s meeting was on the subject of horses on coins. Horses do not appear often on Roman coins but they are to be found pulling bigas (the two horse chariot) or the quadriga with four. this series was later copied in 20th Century Italy. The horse are well represented on Celtic coins who worshiped Epona, the god horse god. Ancient Indian coins often show mounted rulers as does a rare copper coin from Norman Sicily

our last two coins are from Germany. A two thirds thaler of Brunswick-Wolfenbuttel 1789 and then a 12 marien-groschen of Brunswick-Luneburg 168

Surprisingly no-one brought a coin with the reverse of one and the obverse of another to a talk on horses. (A mule!)

our next meeting theme is Egypt
Posted by David at 04:31 No comments: