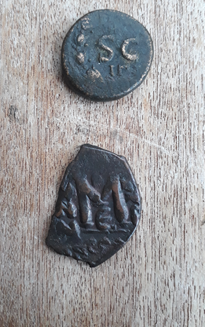 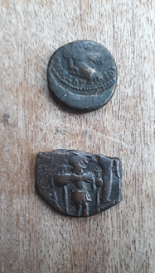 The theme of this month's meeting is "Bad day at the Mint". We will be thinking about coins that have been badly struck or designed.

I have a soft spot for these two coins. the upper coin in both photos is a Roman Provincial coin from Antioch. the portrait is about a third off the flan.

The Byzantine coin is mishappen and not a great design. It maybe made from part of a flan or a very poor flan. There is something appealing in the simplicity of the figure.

Decimals finally get the point!

Britain is set to give up decimalisation and return to pounds shillings and pence. The fifty year long experiment has been a success but it is now time for change in Brits’ pockets.

The old denominations will be reintroduced gradually over 1st April which will now be called A Day. If all goes well we may return to Libra solidus and denarius. Instead of coins being marked “new pence” will now be “new old pence”

Authorities are also thinking of reintroducing those handy denominations that were so popular such as the third and quarter farthing, 1 ½ pence and Cartwheel twopence. If goes well they will re-introduce the noble and angel

It is to be hoped that other countries will return to pre decimal currency. The USA may adopt the same system and perhaps our European friends will keep the euro but have twelve schillings and 240 pfennigs/centimes.

Have a good day.