This month’s meeting featured coins from the Balkans.

Top row: two worn but interesting copper coins from Moldavia and Wallachia. These Eighteen Century coins were struck by the Russians using metal from captured Turkish cannon. These coins were in two denominations - 1 para/3 dengi and 2 para/3 kopeks.

A small Roman coin Caesarum Nostrorum around a wreath containing VOT/X. Mint mark E SIS – Siscia in Croatia the mint mark also includes a rising sun  but what does that signify?
Is the E a Greek numeral 5? 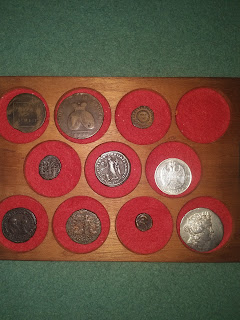 Middle row: PHILIPPI VIC AVG from Macedonia. Philippi was established by Philip II of Macedonia to take control of the neighbouring gold mines and control the route between Amphipolis and Neapolis. Mark Antony and Octavian defeated the assassins of Caesar, Marcus Junius Brutus and Cassius, at the Battle of Philippi in the plain to the west of the city in October 42 B.C. They released some of their veteran soldiers, probably from legion XXVIII, to colonize the city. In 30 B.C., Octavian reorganized the colony, and established more settlers there, veterans possibly from the Praetorian Guard and other Italians.
Coin of Caracalla and Julia Domna from Morcanopolis in Moesia Inferior. Moesia  was
a Roman province along the south bank of the Danube River. It included most of the territory of modern-day Serbia and the northern parts of the modern Republic of Macedonia (Moesia Superior), as well Northern Bulgaria and Romanian Dobrudja (Moesia Inferior).
Modern 1938 20 dinara from Yugoslavia

Bottom row: coin of Philip II from Mesembria in Thrace;
coin from Moesia Superior under Trajan Decius;
Greek coin of Macedonia with a plumed helmet
and finally a local Celtic copy of a Greek stater