the theme this month is tokens

(sorry the image is on its side) 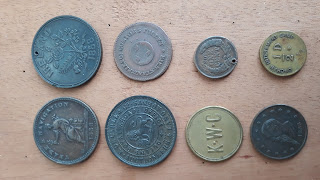 TRADE & NAVIGATION Commerce seated left on a bale, holding caduceus and palm branch.  R. ·PURE COPPER PREFERABLE TO PAPER around, in centre. Pridmore recorded this as having been issued by a Mr Balgarnie, a Scots dry goods merchant in Water Street, Georgetown. Except for the date, the obverse design is similar to English tokens of 1812-1814 with the reverse value ONE PENNY TOKEN, which has been replaced by ONE STIVER. The reverse inscription was apparently selected as a sarcastic allusion to the local government irredeemable 'Joe' notes which had, by 1838, almost succeeded in driving out of circulation all metallic money.

Ireland William Hodgins of Tipperary for use in Australia 1858

A round copper token. The token features the name and business of the company that commissioned its production, William Hodgins, Banker in Cloughjordan Ireland together with a bouquet of rose, thistle and shamrock tied at the base by a ribbon bearing the motto ERIN GO BRACH and the date 1858.

Australia Copper One Penny Token, minted by Heaton & Sons, Birmingham. Issued by E. De Carle & Co, Grocers & Spirit Merchant, Melbourne, in 1855. De Carle arrived in Australia in 1849. Over the following fourteen years he was involved in a wide range of business ventures in Melbourne, taking advantage of the explosive growth caused by the gold rush. He later moved to New Zealand, where he died. De Carle's three different tokens, which featured his business as 'Grocers and Spirit Merchants,' 'Auctioneers and Land Agents' and 'Auctioneers, etc.,' indicated the range of his business activities and speculation. He was also involved in the urbanisation of Footscray and a section of Brunswick. De Carle operated his businesses with a number of partners, in a network of business dealings.

The College issued tokens for use in the school tuck shop. Their period of use was from 1937-1952, and they were issued by housemasters weekly as part of pocket money which could be used in the school tuck shop. It is not known how many were minted or the manufacturer, there were approximately 200 boys at this time, so it must have been a considerable number. Its official name was "tuck shop money", although it was known by the boys as "phoney dough". The main reason for their introduction was to prevent boys spending their money at places other than the school tuck shop. The idea was that any profits should be routed back for the boys' benefit. The money was used to purchase items such as radios and a sound projector for Saturday evening films.

New York civil war token issued by Gustavus Lindenmueller a German living in New York who ran a large saloon and entertainment centre. He got in trouble for trading on Sundays. He issued these tokens in New York during the civil war.

“These little coins filled the wants of the trades-people, and were accepted as a means of exchange for the value, which usually was one cent. They undoubtedly were a source of great relief and convenience, but their irresponsible character soon attracted the attention of the Federal authorities. It is said that the Third Avenue Railroad of New York requested Lindenmueller to redeem a large number of his tokens, which they had accepted in the course of business, but this he laughingly refused to do.”

During World War II, Onchan internment camp was the first camp to be established in the Douglas area. It was made up of 60 houses on a headland north of Douglas. It opened in June 1940 to house “enemy aliens,” Jews who were able to escape Nazi Germany or Austria, but were a concern to a British government fearful of enemy spies in its midst on the eve of war with Germany. Onchan camp held mainly German and Austrian internees until 1942 when Italians were admitted. Like Hutchinson, or P Camp, also on the Isle of Man, Onchan, despite overcrowding, had a multitude of cultural events including a “university” offering lectures in a variety of disciplines taught by the internees. The tokens were issued in 1941.